When Luck Runs Out

A good friend of mine, Reiokyu, often comments on my luck vs. his. I don’t necessarily believe I’m luckier than others, even if I do end up rolling high and ganking almost all the items from a treasure pool at times. Reiokyu is a good guy. I know people take advantage of it. I might even be guilty of it at times, but try to repay his kindness by allowing him to take me along as a good luck charm!? Yeah, he’ll probably shake his head and say it doesn’t work that way, but oh well.

The runs with Prophecy this week was fun on Monday and then became an utter mess on Tuesday when the run ran incredibly long and we had to watch with our jaw dropped after the derpyness of things. I’m even sad I had to leave towards the end because it had gone on longer than I anticipated and had other real life obligations to attend to.

I’ll try to keep it as short as I can because being around sick people this entire week is probably starting to heavily get to my immune system. I slept for a long time after getting home today, and am still feeling fatigued and my throat sore. Am already worried if I will survive tomorrow, but we’ll see…

Anywho, after some conversations with a friend here and there, I have started to feel frustrated with some people. I had started to feel that maybe everyone isn’t what they seem and that all that does matter in a video game is just the loot and items. Screw courtesy or even friendships, right? I know, that’s a very pessimistic view and that I know for certain it isn’t true. However, at times when you are being inundated with wambulance over items, being behind, or the attendance numbers in a group being too large, the last thing I am able to do is think clearly and without bias. Then… this happens and I can’t help but feel humbled and just utterly floored at the same time:

I didn’t think I would get all the items in that one run, and I only have Klife to thank for allowing me to lot on the three Stones of Balance that was in the pool. Needless to say, I eagerly went out to upgrade my pants and got this beauty:

It is most definitely better than +1, which I was wary of using due to the fact I hadn’t noticed better improvement on my nuking damage with them on and had at times seen even WORSE numbers than while wearing Teal Slops. With +2? Oooh boy, was it a marked improvement! Am definitely liking them and am looking forward to getting more of my +1 and +2 out of the way.

Moving onto Tuesday I can’t help but have a bad taste in my mouth as I look back onto it. It was a rather sloppy run which I attribute to possible exhaustion or just maybe it was just one of those derpy days. Who knows? If you are on my twitter list and my conversation with Kyoshin, you will probably know some of the finer details. I even made screenshots, but… I may refrain from posting some of them because the night was so derptastic towards the end that I may just end up marring my name further by posting them.

Instead I will post one of the screenshots vs both since I don’t want to receive any <_<; messages from Reiokyu over it. 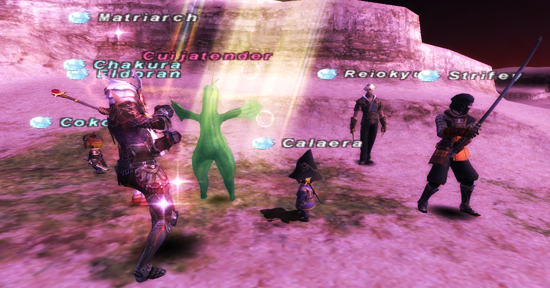 Fought when one of the other pop NMs for Rani was being fought by a soloing BST. When looking back on this, it would have been better to have just sat and waited for the BST to finish than having to fought and suffer through this. I say suffer because, well… it was just bad. I’m sure anyone who is familiar with cacutaurs can imagine and won’t delve any further than this.

In closing, I’m kinda not looking forward to the end of the month. With Hiroshiko leaving for a month and a half or more, I’m really going to miss having him around. Not only do I see him as my little brother, but he’s one of the few people I can vent to and have understand my plight sincerely. Well, and we need someone to kick around on Skype…. ;X

This entry was posted on Wednesday, April 27th, 2011 at 9:37 pm and is filed under Final Fantasy XI. You can follow any responses to this entry through the RSS 2.0 feed. Both comments and pings are currently closed.

2 Responses to “When Luck Runs Out”