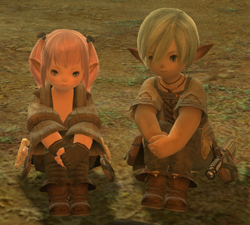 As some may know, I have been in the Final Fantasy XIV Closed Beta since the tail end of Alpha. It has been amazing to see the game grow and change since its alpha testing stages to the current stage it is at right now in open beta. Yeah, sure, there are bugs, but what MMORPG isn’t buggy upon release? And that hasn’t even been in another country for a year to work out those said bugs? I think its fine. Sure, people are complaining about this and that but I’m not particularly worried that it will affect my enjoyment of the game. Even in its current state, I find myself having fun with what I am able to play with. Others may not feel the same way, which if fine. In the Western MMO market there are other options (both free and pay to play) people are able to choose from that doesn’t have to be FFXIV.

Though I have to admit, after not having really played Final Fantasy XI actively for a year, it was a little hard getting used to the pace of enjoying the journey vs. getting to the destination (though, from my current understanding of the XI environment, getting to the destination quickly seems to be made easy due in part of the Abyssea expansion). The hand holding experience of WoW and Aion almost had me fumbling over Final Fantasy XIV, but it was quick and easy to get back into the groove of things and settle into the rhythm Hydaelyn had to offer. The environments itself made me remember why Final Fantasy XI was such a special gem and why I felt that magical return to me for Final Fantasy XIV; it was so easy to feel so immersed in the world itself and not feel that it was a game where I needed to quickly hit enter to get to the next thing. Even though finding an NPC can sometimes be like finding a needle in a haystack, it is in successfully finding those NPCs or learning something how to craft that just tickles me with delight and wonder at what else I can learn and accomplish.

Crafting, by the way, is the most fun I had ever had in any sort of crafting system I have tried to date. Granted there are still some aspects I feel could use tweaking (I’ve never been a fan of having to individually select my items to craft with), but in general I’ve found myself wanting to craft. Yes, that’s right. I WANT TO CRAFT. Not often does that happen or that I’m not just willing but excited to do something like crafting.Stranger still? Me like a hand-to-hand job. Yes, that’s right, a hand-to-hand job. Hard to believe, yeah? But here I am! Playing a hand-to-hand job and loving every moment of it!

I’m actually trying very hard not to play too much because I don’t want to ruin how things will be when the game finally comes out for its retail version. There is so much I want to do and try out, even though I know that in two weeks time all that data will be wiped clean. ( ;^;) Still… I’m really excited to play Final Fantasy XIV and to be more full immersed in its community than before. The people I’ve met and talked to have been generally great and supportive of not just the game but of each other. Even better is being able to reconnect with friends from Final Fantasy XI whom I have missed during my absence. ♥ I definitely feel at home in this game compared to WoW and Aion, and am eagerly looking forward to seeing how the game will develop from here on out.