Well, probably more of a… “Here, let me show you how I can lower your IQ points by THIS much.” If you are following me on twitter, most likely you have seen how I refer to my LS as #teamderp. That is not just because I have a separate LS named TeamDerp, but because Reiokyu has made claims we can severely lower IQ points if we really go at our hijinks I get tired and just go to the deep end. The sad thing is, I barely remember what I say and I’m pretty sure I will be horrified when someone does tell me the specifics! On the other hand, I do remember laughing! Laughing and lots of fun! I just hope Kimiko and Chakura’s friend decide to come back and not be scared off cause I was undeniably crazy last night.

mreh/TeamDerp has had a wonky time for the past few weeks. Hiroshiko had left for a two month break (the little snot lied about coming back mid June!), people traveled, I had found my hands full of work, and in genera things were a little crazier. Thankfully it picked up again thanks to Rubicon simply voicing what I had been thinking for awhile: we needed to go back into the swing of things. Though we are pretty much a casual LS, we still have our laundry list of things to do that we would like to get done! There are a few of us who still do not have complete +1s on our primary jobs and there are some who want to get more atma. Thursday and Friday was a push towards those goals by getting more Limbus out of the way for fabricated atma, and then going off to Vunkerl Inlet to hunt feet seals. Mekare has now completed her WAR feet, Orophen has his RNG feet completed, Lexshu is now 6/8 on DNC, and (sadly) Rubicon had barely made a dent on his by netting only one or two last night.

To try and make things a little better for the Ragin’ Cajun, we had also made a venture into Dynamis-Bastok late Friday night/early Saturday morning. It was the first time I had gone inside since the update to Dynamis and Rubicon’s first time in there at all! My thoughts on the new version of Dynamis? It was definitely not what I had expected at all! We got the boss within minutes of entering, we were able to get time extends without demolishing an entire zone (just having to deal with nasty pulls and links; something we were dealing with quite frequently in Vunkerl anyway), and even netted some gear and a few coins for people. It also just felt really nice to wander in without having to kill every. single. damn. mob. in existence. I’m looking forward to more ventures into Dynamis with smaller parties and walk away with old but still attractive gear!

Well, at least I think its take three… either way this time it was a little more productive than the last time we attempted seal hunting in Attohwa. The last time I believe everything BUT the seals we were looking for dropped. We still have had no luck at all with Sylvan seals dropping for Orophen, but we managed to finish off Mekare’s Estoqueur’s Chappel +1 and get myself all 8 Goetia head seals to complete this beauty:

Thanks to Orophen, Reiokyu, Mekare, and Hiroshiko for helping me getting the rest of the seals today! Also want to thank the other Linkshell there that allowed us to alternate popping Wherwetrice. It was mutually beneficial as we allowed them to lot on the WHM seals we managed to get, and they let us lot on their RDM seals for Mekare. Its more than what we can say for the other Linkshell that decided to just swoop in, take the pop, and proceeded to, well… 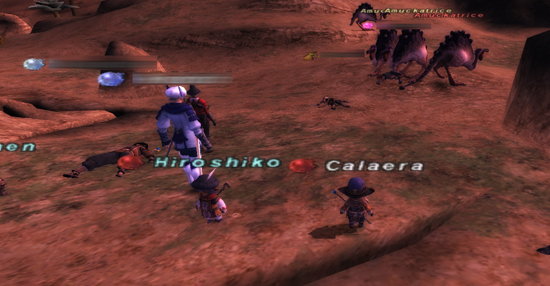 I was on Skype with Orophen and Reiokyu at the time, and was laughing my head off for a good while due to this. Now, I wouldn’t have laughed so hard if a.) they hadn’t had just swooped in without saying anything to either Linkshell b.) they had looked like they knew what they were doing (the BLM didn’t seem like he knew what he was doing to trigger yellow !! and they took an awfully long time just to kill the damn thing) and c.) they would have at least the sense to pull Wherwetrice in a less aggro prone area. They ended up having to let their RDM run off, and uh… I don’t know what happened after that. My party and the other Linkshell, however, managed to resume business as usual soon after the ordeal and thankfully (or sadly? I could have used more laughs) didn’t see the other party again after that.

For Orophen, we might just have to tackle Nightshade since Kharon didn’t want to put out on Sylvan seals. Which is fine by me since Nightshade looks awfully cute! However, judging by the responses from Hiroshiko and Reiokyu it doesn’t seem like a NM that they are particularly fond of tackling. Which makes me more excited to fight it since it seems cute and dangerous/pain-in-the-ass. :3